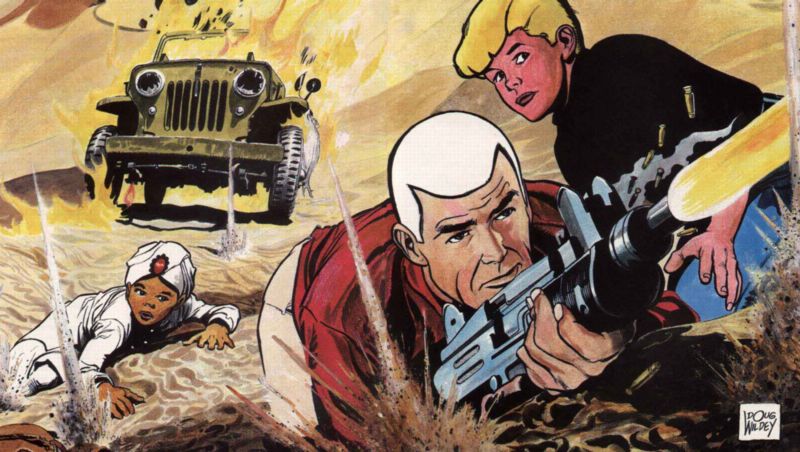 It is easy to deny an idea, but harder to deny a fact when it is in front of you. When the Bible claims to be true and also inspired by God, what are the facts?

In the 1960s animated television series “The Adventures of Johnny Quest,” Johnny and his father travel the world in search of scientific answers to seemingly non-scientific events. The cartoon captures the spirit of our age, which is the quest to uncover believable facts to help us explain the meaning of our world.

Many people who deny the Bible usually just deny an idea they have of the Bible. Few people take the time to read the Bible themselves. When you do read the Bible you see it is filled with more than mere ideas. In Psalm 19:1-6[1] the writer, Kind David, said, “The ________________ declare the glory of God; the _______________ proclaim the work of his hands.” The writer didn’t just make a claim and tell the reader to believe it. The writer said that the reader should, in effect, become like a Johnny Quest and look at the world around them and let the facts of the physical world speak for themselves.

While Johnny Quest may be a fictional character, there are many real life Johnny Quests who have done just this.

Lee Strobel and “The Case For Christ”

Lee Strobel was an investigative journalist for The Chicago Tribune. He was also an atheist. When his wife came home one day and told him she had decided to believe in Jesus he was shocked. And nervous. So he went on a search himself. He put to work his skills as an investigative journalist to inspect the claims of Christianity. Here is his story.

Not only did Strobel become a believer in Jesus after his investigation, he has now written some of the most important books on the subject. Strobel’s books, “A Case For Christ” and “A Case For Faith,” expertly outline the evidence for believing the claims of scripture. This is what Lee Strobel says about the reliability that the Bible is inspired by God.

The God who created us loves us so much that he left us a revelation about himself in the books that make up the Bible. He wants us to know him; to know what he has done, what he is doing, and what the future holds for all mankind.

The Bible is the most important and accurate resource we have to discover the treasures God has in store for us. It is a wealth of information to equip us for everyday living and to prepare us for eternity. God reveals both physical and spiritual truth in His Word.

What Does it Mean to be Inspired?

When we “get an idea” to do something, we sometimes say we have been “inspired.” Butterflies in the stomach of a young boy in high school for the girl who sits next to him may cause him to be “inspired” to become an outstanding athlete in order to win the girl’s attention. Maybe the desire to lose a few unwanted inches around your waist will “inspire” you to eliminate sweets from your diet. Soldiers have been “inspired” to perform great acts of courage in the face of danger in order to save their buddies.

The Greek word translated as “inspired” literally means “breathed.” The Greeks understood this to mean “god-breathed.” They had the idea that a divine being known as a “muse” would literally breath into your spirit the idea and ability to do great things. Here is Hollywood’s interpretation of what is “The Muse.”

Even before the use of the Greek idea of “inspire” the writers of the Bible understood it was God who was guiding them. They knew they were doing something far more important than expressing their own ideas. God was speaking through them by the help of the ultimate muse, the Spirit of God.

Some view the Bible as “generally” inspired. General or “universal” inspiration is the idea that certain men and women of genius are inspired in the sense that they are exceptionally talented and accomplish extraordinary things. People like Michelangelo, Beethoven, or Michael Jordan are said to be inspired. It is believed their talents are given to them by God or some muse.

In ancient times there was a leader so brave and successful that even his enemies called him inspired. He was the Prince of Egypt. Moses, the first writer of the Bible. But even though all that knew of him thought of him as Generally Inspired, not all understood that he was specifically inspired by God to perform God’s will. In Exodus 3:7-10[2] God reveals that Moses is called to lead the enslaved Israelites to freedom. He is more than a talented man, he is a man on God’s mission.

Partial Inspiration means that a person may be prompted to do something generally, but how they go about it particularly is left up to them. God may inspire a person to be “good to your neighbor” but the particulars of how they go about being good is up to them. To view the Bible as Partially Inspired is to believe the writers have good intentions, but that the message is ultimately their own creation.

The Bible writers did not believe they were Partially Inspired, however. They had the firm belief that God was speaking to them specifically and that they would be held responsible if they did not give the exact message God was intending them to give. In the final chapter of the Bible, in Revelation 22:18,[3] the writer warns the reader, that “If anyone __________ anything” to the writing that “God will add to that person the _________ described in this scroll. And if anyone takes words away from this scroll of prophecy, God will _____________ from that person any share in the tree of life and in the Holy City, which are described in this scroll.”

This is the view that the Bible is completely inspired by God. God chose those who wrote the Scriptures and they wrote what God wanted them to write.

Evidence the Bible is Inspired: M.A.P.S.

It is one thing to claim the Bible is inspired by God. But what is the evidence?

M.A.P.S. is an acronym standing for Manuscripts, Archeology, Prophecy, and Statistics. It was developed by Christian researcher Hank Hanegraaff as a way to remember these key areas of evidence supporting the Biblical claim of inspiration.

Manuscripts show the Bible’s reliability because of their accuracy of translations and their historic references. Read Hanegraaff’s description:[8]

It could be claimed that accurate manuscripts is not really evidence of divine guidance. Maybe the Hebrew people were just particularly diligent with their passing down of their documents.

The “external” evidence, however, is hard to refute. One of the most powerful external evidences is history itself. Many claims were written in the Bible long before the discovery of the historic fact to support the claims. There was no way the Biblical writers could have known these claims were true had not God revealed it to them. Here are some historical facts followed by the Biblical accounts that preceded them:

Historical Fact: People feared Christopher Columbus and his ships would sail right off the edge of the world because it was believed the world was flat.
Biblical Truth: Isaiah wrote several centuries before in Isaiah 40:22[9] that the earth was a _____________.[10]

Historical Fact: For centuries people believed that the planet was held up in various ways— on the back of a giant turtle, or that Atlas stood on the back of four elephants and held it on his shoulders. (Greek Mythology)
Biblical Truth: In Job 26:7[11] we read, “He suspends the earth over ____________.”

Check out this list of more than two dozen more Biblical references to knowledge the Biblical writers knew even before it was scientifically understood.

Another evidence that scripture is inspired can be found in Archeology. Read Hanegraaff’s description:{[12]

Fred Williams wrote for BibleEvidences.com, “I believe one of the more overwhelming testimonies regarding the depth of archeological evidence for the New Testament is in the account of the famous historian and archeologist Sir William Ramsay. Ramsay was very skeptical of the accuracy of the New Testament, and he ventured to Asia minor over a century ago to refute its historicity. He especially took interest in Luke’s accounts in the Gospel of Luke and the Book of Acts, which contained numerous geographical and historic references. Dig after dig the evidence without fail supported Luke’s accounts. Governors mentioned by Luke that many historians never believe existed were confirmed by the evidence excavated by Ramsay’s archeological team. Without a single error, Luke was accurate in naming 32 countries, 54 cities, and 9 islands. Ramsay became so overwhelmed with the evidence he eventually converted to Christianity” Here is a video about Sir William Mitchell Ramsay.

Surprisingly a popular argument against the Bible being inspired has been the reliability of prophecies recorded in the Bible. It is surprising because when a person actually looks at the fulfillment of many of the prophecies the evidence for their reliability is undeniable. Read Hanegraaff’s description:{[13]

Many of the prophecies in the Bible have to do with the coming of Jesus and the events of his birth, life, death, and resurrection.

Read Hanegraaff’s description of the importance of Statistics in understanding the Bible’s reliability:[18]

The novel Ulysses, by the Irish writer James Joyce, is considered one of the most important books in the English language. And yet, having been in existence a mere ninety years, the book is embroiled in controversy regarding the question of reliability of modern editions being true to the original author’s writing. This is an English language book simply being reprinted in the same language. Unfortunately the problems with this book are not rare when it comes to the histories of writing. Statistically when any text is edited for new editions, or translated into new languages, something of the original text will be lost. It might simply be punctuation, or it might be a slew of whole sentences.

Beyond all statistical odds, however, the Bible has remained true to its original texts over thousands of years.

Remember, it is easy to deny and idea about something. Read the Bible for yourself and make up your own mind about how reliable it is both in its claims about being the Inspired Word of God, but also for what the wisdom of the Bible will do to enrich your life.